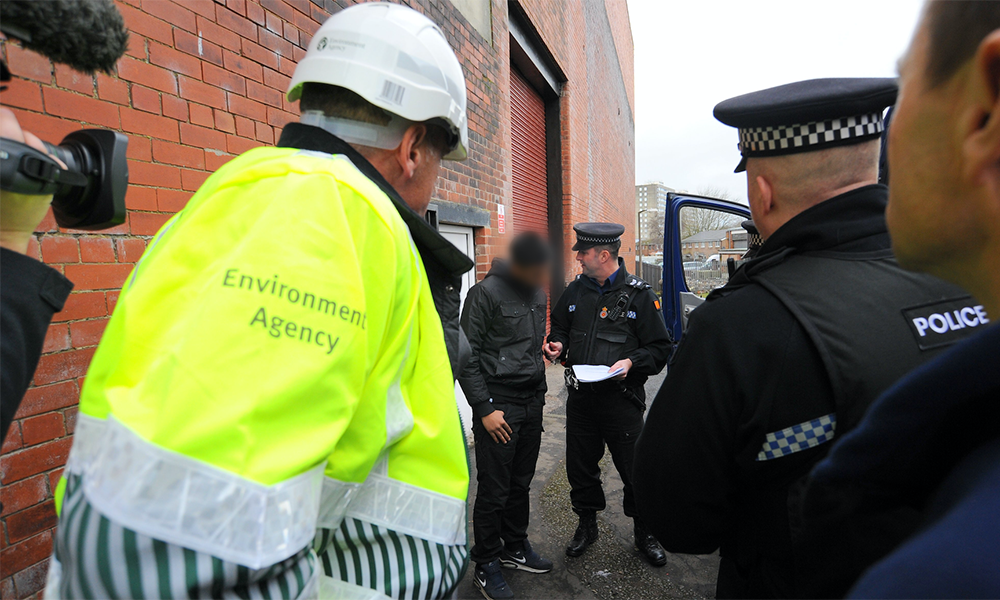 A new taskforce has been launched that is dedicated to tackling serious and organised waste crime.

Waste crime, such as dumping hazardous materials on private land and falsely labelling waste so it can be exported abroad to unsuspecting countries, will beamong the crimes tackled by the taskforce.

The Joint Unit for Waste Crime (JUWC) will for the first time bring together law enforcement agencies, environmental regulators, HMRC and the National Crime Agency in the war against waste crime.

Serious and organised waste crime is estimated to cost the UK economy at least £600 million a year and a 2018 Home Office review found that perpetrators are often involved in other serious criminal activity, including large scale fraud and in some cases modern slavery.

With an aim of tackling the growing trend in criminal waste networks, the new unit will conduct site inspections, make arrests and prosecutions and, upon conviction, push for heavy fines and custodial sentences.

We will target serious and organised criminals across the country as they try to illegally exploit the waste industry and the environment. These criminal gangs need to know that we have them in our sights

Toby Willison, Chair of the JUWC Board, said: “The war against waste crime just took a giant step forward. The launch of this new unit means we now have a full complement of partners across law enforcement as well as our counterparts in Scotland and Wales to bring down waste criminals for good.

“We will target serious and organised criminals across the country as they try to illegally exploit the waste industry and the environment. These criminal gangs need to know that we have them in our sights.”

The Environment Agency says that by working together in this way, Joint Unit partners can more easily share their intelligence and resources to take swifter action when investigating criminal waste operations and other connected illegal activities, such as money laundering and human trafficking.

As a result of prosecutions taken by the EA, businesses and individuals were fined almost £2.8 million for environmental offences in 2018.

The Joint Unit for Waste Crime is one of a number of initiatives in the government’s landmark Resources and Waste Strategy, which is focused on tackling waste crime and driving up levels of performance in the industry.

Welcoming the new Unit, Environment Secretary Theresa Villiers said:“Waste crime is a scourge on our environment and this new Joint Unit for Waste Crime will crack down on the criminals responsible.

“Criminals are shifting their focus to waste crime as they expand their illegal activities and it’s vital that we take action. The Joint Unit will shut down illegal waste sites, catch criminals before they can do further harm to our environment and local communities, and make them pay for the damage they have done through custodial sentences and the payment of compensation.”

Since 2015, six legislative changes have been made to enable the EA to take tougher action against waste criminals.

This includes the Agency having the power to restrict access to problem waste sites by locking gates and barring access. Environment Agency waste crime budgets have also risen by £60 million for 2014-22.

CIWM has welcomed the launch of the Joint Unit for Waste Crime, saying it is important that the waste and resource management sector supports this initiative.

CIWM President, Trevor Nicoll, who sits on the JUWC oversight board said: “Our response to the growing threat of serious and organised waste crime must be swift and effective and this new unit provides for the multi-agency collaboration and intelligence-sharing that is crucial to achieving this.

“With conservative estimates indicating that waste crime costs the economy £600 million a year, it is important that the waste and resource management sector supports this initiative and continues to work collaboratively with government and regulators on a range of measures to curb the opportunities for organised criminal groups to be able operate in this sector.”

The creation of the JUWC was a recommendation in the Independent review into serious and organised crime in the waste sector, which was published in November 2018.

We are delighted to announce we have invested in weightsoft

Weightsoft will enable Wyndham Resources to offer our customers numerous mobile applications and much more !    ...

The Mayor of London has abandoned moves for a judicial review over planning approval for Cory Riverside Energy to build...