Lancashire Fire and Rescue Service has launched an investigation into the cause of a fire at a vehicle recycling yard operated by Recycling Lives in Preston during the early hours of Sunday morning (27 January).

Residents were warned to keep windows shut, as around 100 cars were alight

Crews from Burnley, Blackburn, Hyndburn, Darwen and Preston were called to the site on Longridge Road, in the north east of Preston, shortly after 01:00 yesterday morning, where around 100 cars awaiting scrappage were found to be alight. Around 12 fire engines attended the scene, and no casualties were reported.

The fire was contained at 04:00, with the service using mechanical diggers to create fire breaks.

At around 09:00, the last of the crews dealing with the fire left the site. Residents were warned to continue to keep windows closed, despite smoke plumes having reduced in size.

In a statement, Lancashire Fire and Rescue Service, said: ”Water used to extinguish the fire has been contained on site, preventing pollution of water courses and surface water drainage. The smoke plume is much less than it was but residents living nearby are advised to keep windows closed and with some disruption to local traffic due to the movement of fire engines and hoses laid in the road, we ask that people stay away from the site until the incident is over. There have been no casualties and the cause of the fire is to be established.”

The Recycling Park at Longridge Road is described by the company as its ‘flagship’ recycling site – a 15.7 acre facility with a fragmentiser, depollution line and fabrication, welding and warehouse facilities. The Recycling Park uses a depollution line – to strip end of life vehicles (ELVs) before they are shredded, separated and recycled – as well as the fragmentiser.

In a statement, Recycling Lives, said it would be ‘business-as-usual’ at the site from today.

A spokesman for Recycling Lives said: “At around 1am on Sunday security teams detected a fire at our Recycling Park on Longridge Road in Preston. Emergency services were called and thanks to the work of fire crews, along with a number of our own team who quickly attended site, it was extinguished by 4am.

“Thanks to our first-rate environmental and safety processes and training no-one was injured and damage was able to be easily contained.

“We are now conducting a thorough investigation and are pleased to be able to safely restart operations as normal tomorrow.

“We are extremely grateful to the fire service and our team members whose work and efforts were exceptional.”

The company had previously suffered a fire at the facility in April 2015 (see letsrecycle.com story).

Recycling Lives this month reported a 61% rise in its year-on-year sales for 2017/18 up to £75 million (see letsrecycle.com story).

The Fire Service posted a video on Twitter showing efforts to tackle the fire. 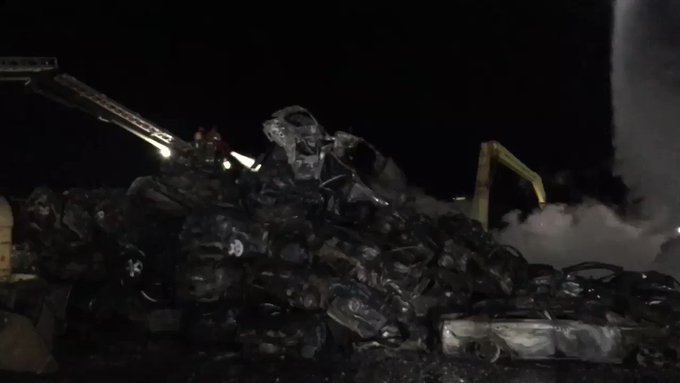 Not so difficult after all: microwaves target PET

The Mayor of London has abandoned moves for a judicial review over planning approval for Cory Riverside Energy to build...

Defra in call ‘to move waste up hierarchy

The Department for Environment, Food and Rural Affairs has published two policy papers covering its monitoring and evaluation work on...

Wyndham Resources (UK) Ltd are proud to announce that we have been shortlisted as a finalist in the MRW National...